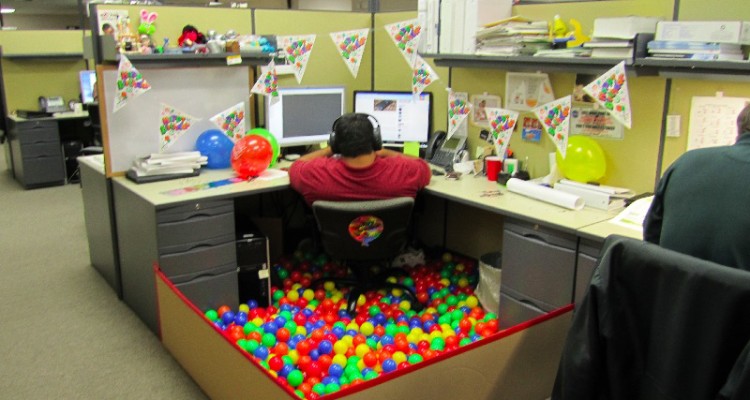 Sometimes the monotony of the office cubicle life can be overbearing. You wake up, eat breakfast, commute to work, sit in a cubicle for 8 hours or so, drive home, and repeat. It is easy to fall into a daily routine where not much changes, but it doesn’t have to be this way! That’s why I encourage you to try one of the following five harmless office pranks on your coworkers to spice up your afternoon a bit (I may or may not have done these myself).

Strategically Place Something that Beeps In Your Cube-Mate’s Desk

This is a personal favorite of mine because I’ve executed it to perfection. You take something that intermittently beeps and you strategically hide it in a hard-to-find location. Through multiple tests I’ve decided that taping it to the bottom of their chair is the best spot. They will lose their mind trying to find where the beeping noise is coming from. In my case, the sucker had pulled every drawer out of their desk, removed everything form the top of their desk, and after a few hours and dozens of curse words, I showed the poor guy where it was. He was none too pleased, but I was in stiches.

This is a very simple prank to pull and it works to perfection nearly every time, especially on those who are not as computer savvy. For this prank you take a screen shot of the person’s desktop. Next you want to hide all of the folders on their desktop (DO NOT DELETE THEM. Maybe put them all in a master folder somewhere.). After you’ve hidden the items on their desktop, make the screenshot their new desktop image, hilarity will ensue. Watch as they frantically click everything on their desktop, turn their computer on and off, get IT, and eventually unplug everything. Instant laughter.

Change the Language of Their Computer

Simple yet strangely satisfying, change the language settings on your cube-mate’s computer. All of a sudden everything could be in Spanish and they will have no idea why! If this one doesn’t seem as fun, try changing the time that displays on their computer, to be either an hour ahead, or behind. This may seem a bit cruel, but it is absolutely hilarious to see their confusion when everyone is packing up to go home and they still think they have an hour left!

Cubicles.net is a full service contract office furniture dealership specializing in cubicles, office seating, office tables and more. Our founders and team members have a combined 45 years office furniture experience enabling us to provide sales, service and expertise to any office expansion, move or addition. Our main goal is to provide your business with quick, affordable office furniture solutions that maximize your money, time and workforce.