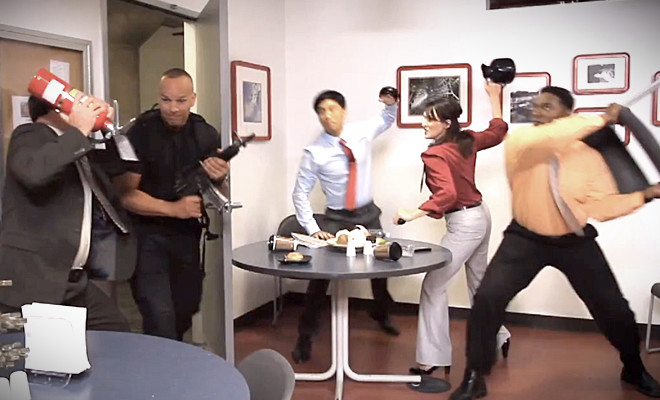 Have you ever worked with an employee or manager that you could absolutely not stand? I’m sure it didn’t take you long to answer that question, as we all have. Unfortunately for us, most of the time you just have to grin and bear the frustration. But what if you could do something about that frustration, like enter the boxing ring with them?

The Esquire Network introduced a television show titled “White Collar Brawlers” where feuding coworkers can engagement in a boxing match to settle the dispute. Sounds awesome right? The premise of the show is geared around ill-feelings in the office cubicle spectrum – and then acting on those feelings in an organized boxing match. It’s not a free for all, as there are still actual rules in place.

The first episode highlights two coworkers who had previously been good friends, eating lunch together daily and sharing an apartment. At one point their friendship had soured as a result of a dispute about an apartment rental. This feud has boiled over to the point that they have agreed to box each other. The show then follows the gentlemen on their journey up to the fight, documenting their training sessions and providing several opportunities for them to voice their ill-will.

Ultimately, fighting a coworker is obviously frowned upon, no matter how bad you would like to pound them. There are actually staggering numbers regarding workplace violence – “a recent poll from workplace communications firm the Marlin Company found, disturbingly, that 11% of workers reported “being angered by a co-worker to the point where they felt like striking him or her but didn’t.” 11% seems like a fairly steep number, but may bode well for the longevity of White Collar Brawlers.

Cubicles.net is a full service contract office furniture dealership specializing in cubicles, office seating, office tables and more. Our founders and team members have a combined 45 years office furniture experience enabling us to provide sales, service and expertise to any office expansion, move or addition. Our main goal is to provide your business with quick, affordable office furniture solutions that maximize your money, time and workforce.

No Comments on "Enter the Boxing Ring with a Colleague"